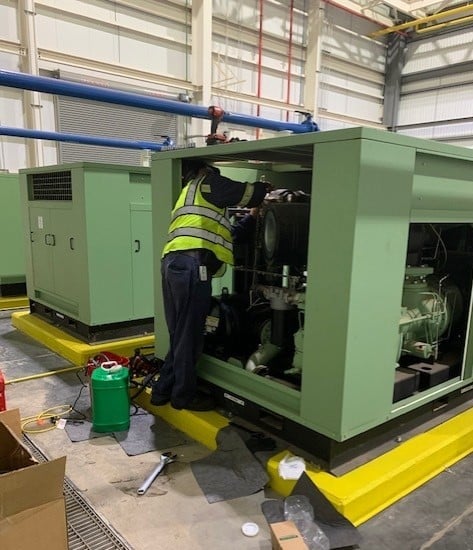 “We need a bigger compressor.” That’s the typical response when a manufacturing facility experiences pressure or flow problems with its compressed air system. Thus, the typical response: “Throw more horsepower at the problem.” As a result, tremendous amounts of money -- thousands of dollars a month -- are being wasted on utility costs in virtually every plant examined by our company, Atlas Machine and Supply.

The United States Department of Energy has recognized the huge amount of wasted energy in plant air systems. The DOE’s national initiative, the Compressed Air Challenge, was launched to focus attention on this problem.  Thus, more and more manufacturers in the Ohio Valley are beginning to discover the potential reductions in energy costs that can come from optimizing the design and operation of their compressed air systems. For instance, at five cents per kWh on a two-shift operation, the cost to operate a compressor exceeds its purchase price in just one year, even if it is operating as efficiently as possible!

In today’s intensely competitive market, the pressures to reduce costs at the plant level have reached all-time highs. Plant managers are constantly seeking new ways to improve efficiencies and reduce waste, without hurting performance. In almost every instance, the plant compressed air system represents a tremendous source of waste and opportunity for savings, thereby delivering dollars directly to the bottom line.

Compressed air has been called “the fourth utility.” And virtually every industry relies on it. Yet it remains the most inefficient form of energy of all. Some larger compressed air distributors have responded to this situation by establishing new technical support teams to focus on plant air energy savings. The more sophisticated organizations use degreed engineers for this purpose.

In a typical plant air survey, data collection devices are installed around the plant to monitor system performance. Data is logged over several days on both the supply and demand sides of the compressed air system. A thorough computerized analysis of the data will then usually reveal just where the inefficiencies are, and the engineer then recommends changes in system design and/or operations.

The results we’ve found to this point have been quite surprising. Evidence reveals that the typical plant compressed air system is operating at only 60% to 70% efficiency. A quality compressed air survey coupled with accurate interpretation of the data, can identify opportunities for savings and deliver an action plan to achieve the highest level of dynamic efficiency. Many plants in this area have taken note.

A plant engineer for a wheel manufacturer in Frankfort, Ky. commissioned an air survey and was pleasantly surprised at the results. “It took the guess work out of decision-making,” he said. Another manufacturer noted, “The survey produced fresh ideas and solutions that we had not previously considered.” Similarly, a steel processor in Columbus, Ohio, also said, “The survey clearly spelled out our current usage and was presented very well.”

Even though peak loads may only occur for short durations, many systems run enough horsepower to cover these peak events constantly. In one typical plant, we found this excess horsepower costs $80,000 a year to operate. We then assembled an action plan to reclaim those efficiency losses with less than a two-year payback and with a positive cash flow from the beginning. Consequently, system performance in the plant improved significantly.

Since compressors are frequently big contributors to electric utility demand charges in a plant, potential cost savings in the electric bill can also be substantial. By simply comparing the on-line horsepower to the measured real-time loads and improving the control algorithm of the compressed air system, we’ve witnessed demand charges cut in half.

Evidence also indicates that leaks in the compressed air system produce tremendous unnecessary costs. We’ve found leak loads at the rate of 15% to as high as 55% of system capacity. Thus, many plants spend thousands of dollars a month just to support their air leaks.

To be sure, we have seen a few rare cases in which plants were doing a pretty good job, operating at 90% efficiency or more. But even in these rare cases, demand-side studies have revealed opportunities to reduce the load and improve performance.

The basic principles of efficiency are as follows: It takes approximately 1% more horsepower to produce an extra 2 PSI in system pressure. Thus, any time pressure can be reduced in an installation, the savings can also be significant.

But many plants simply crank the pressure up as high as possible. This is usually in response to some sort of supply problem somewhere in the plant. And, without controlled air pressed stored in receiver capacity, slow reaction time to plan event loads may place the system in jeopardy. Thus, most plants run substantially more pressure (and subsequently horsepower) than is really necessary. But this is simply the learned response: just throw more horsepower at the problem. The inevitable result is an inflated level of artificial demand supported by excess horsepower.

By simply taking a serious look at system design and operation parameters, horsepower can usually be reduced while simultaneously improving performance. But good data is essential to this process. Most installations have made their decisions based on “educated guesswork,” at best.

We continually discover new opportunities for operational cost savings through system optimization. Generally, most plant air systems are full of inefficiencies. These should be viewed as opportunities to reduce costs, and thereby be more competitive.

For more information on cost-savings opportunities for your plant’s compressed air system, contact Atlas Machine and Supply, Inc. at (502) 584-7262 or visit www.atlasmachine.com.

Editor’s note: This article was written by Atlas Machine and Supply and originally published in The Kentucky Manufacturer, Kentucky’s Business-To-Business Journal for Industry.